We’re thrilled to unveil the latest issue of the eJournal of Public Affairs, a collaboration between Missouri State University and AASCU’s American Democracy Project. This issue features content from the 2017 Civic Learning and Democratic Engagement meeting in Baltimore, Md. organized by ADP, TDC, and NASPA’s LEAD Initiative.

Issue 7.1 of the eJournal of Public Affairs is what we’re reading!

Collaborative Engagement from within the Academy: A Self-Reflexive Narrative

By Danielle L. Lake, Grand Valley State University
This essay builds upon the current movement around publicly engaged scholarship, seeking to illuminate its challenges, risks, and rewards through a…
Read more

College Student Food Insecurity and Awareness and Use of Supports: Recent Findings from a Survey of Students at a Mid-Sized State Comprehensive University in Kansas

By Nancy Thomas, Tufts University
The debate over free speech and inclusion in higher education is not new, but it has reached new levels of vitriol and confusion as…
Read more

By Chase Willhite, Kansas Health Foundation
Across Kansas, as students like Shane Keller face increasing economic challenges, food insecurity becomes an issue. But, with the help of a Kansas Health…
Read more

By Martín Carcasson
Amid perhaps the most polarized time in our nation’s history, the quality of public discourse has also reached historic lows. Civic engagement practitioners must find ways to…
Read more

By Jane Coaston
Young conservatives are here to stay, and in 2016, they voted in higher numbers — and exhibited higher engagement with candidates and issues — than they had…
Read more

By Eric Liu
Far too many Americans are illiterate in power – what it is, how it operates, why some individuals have more than others. As a result, those few…
Read more

Do You Live in a Civic Desert?

““Civic Deserts” — communities without opportunities for civic engagement — are increasingly common in the United States. The continued decline in a wide range of important indicators of civic health and connectivity threatens our prosperity, safety, and democracy.” (p. 4)

Some of the findings highlighted in the report include:

ADP is proud to have played a role in the crafting of a new campus resource — a toolkit for crafting campus plans for increasing college student civic learning, nonpartisan political engagement, and voting rates. As a member of the Students Learn Students Vote Coalition, we hope you’ll find this new resource helpful and look forward to hearing from you about how you use it and what could be added to make it even better! 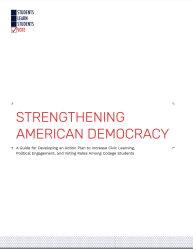 This is a tool designed to help faculty, staff, and students write strong action plans to increase civic learning, democratic engagement, and voting rates among college students. It provides a framework for developing and documenting institutional goals and strategies. It is not meant to be prescriptive and should be adapted to your institutional context.

Chad Woolard, Ph.D., is an instructional assistant professor in the school of communication at Illinois State University and a long-time ADP supporter. His new book, Engaging Civic Engagement: Framing The Civic Education Movement In Higher Education (Lexington Books, 2017) is what we’re busy reading.

According to Chad, his new book asks:

Learn more about the book in this flyer.

We recommend reading the latest issue of the Journal of Higher Education Outreach and Engagement (JHEOE), a peer-reviewed, interdisciplinary journal  published by the University of Georgia. JHEOE is dedicated to advancing theory and practice related to outreach and engagement between higher education and communities.

In the latest issue, volume 21, No. 2, JHEOE authors address opposing perspectives on the purpose of engagement and tensions and contradictions in the relationships between communities and universities, among many other topics. Authors view community engagement from multiple conceptual perspectives, including community-based learning, collaborative relationships and faculty development and engagement as a strategy for justice. The reflective essays, research articles, projects, and book reviews in this issue provide new insight into challenges and explore problems to an even greater depth.

The journal is available here.