Five hundred and eighty-five faculty members, students, administrators and representatives from our national partner organizations gathered in Denver, Colorado for the third ADP/TDC Joint National Meeting (and ADP’s 11th annual meeting), June 6-8, 2013. The theme of the meeting was “21st Century Citizens: Building Bridges, Solving Problems.” Representatives from nearly 100 four-year colleges and universities and 40 community colleges attended the event. One hundred and forty-five students attended the conference (compared to 95 last year). This was by far our most successful ADP National Meeting to date. 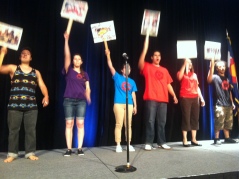 Ronan. Steven Jordan, president of Metropolitan State University of Denver, welcomed the large group to his city, followed by Melia Tagovailova – a recent Metro State graduate – who sang a beautiful and stirring rendition of the Star Spangled Banner. Metro State’s Chicano Studies performance group Journey Through Our Heritage burst on to the stage to share with us a story of protest and personal reflection. We then heard keynote speaker Denise Fairchild – President & CEO, Emerald Cities Collaborative – talk to us about “getting on the bus” of social change (Listen to her plenary talk.) She discussed the importance of civic engagement in the sustainability movement, and how informed and engaged Millennials will be the movers of shakers we need to create lasting change; all we have to do is give them the tools, skills, and the information.

We began the day Friday with a series of early, but energizing breakfast sessions. Participants heard from national ADP/TDC partner organizations including: Community Learning Partnership, GiveGab, Echoing Green, Street Law, the eJournal of Public Affairs, NCoC, the National Issues Forums Institute, and The Foundation for Democracy in Africa.

Peter Levine, the Lincoln Filene Professor of Citizenship & Public Affairs in Tufts University’s Jonathan Tisch College of Citizenship and Public Service and Director of CIRCLE, The Center for Information and Research on Civic Learning and Engagement, provided Friday’s plenary talk: A Defense of Higher Education and its Civic Mission (you can also listen to it here).

After the morning plenary session, we broke into a series of featured and concurrent sessions. Friday’s Featured Sessions included panels on Purposeful Work: Educating for Citizen Careers, and Civic Pathways: Community College to University Transfer Programs; workshops about Preparing for the 2015 Carnegie Classification for Community Engagement and CIRCLE’s National Study of Student Learning, Voting & Engagement. There were also sessions about programs including The Human Library and ADP’s Global Challenges curriculum. Student presentations included one by SWER: Students Working for Equal Rights and another on multi-campus presentation on “Tweeting in Class!” Student Microblogging & Civic Practice. Three separate presentations constituted a featured session on Civic Learning in the Curriculum & Dialogue and Deliberation.

Throughout the day we successfully experimented with new session types including short Lightning Round presentations clustered by topic, a more dynamic poster session, and panels and workshops. This year’s Poster Session had 12 submissions. Posters were presented by students as well as faculty and staff. The posters highlighted results of various research projects on topics including hunger, voting, veterans on campus, gender identity, and global engagement.

Two students from both ADP and TDC speaking on civic engagement and its impact on their lives.

Afterwards, meeting attendees were treated to another vast array of panels, workshops and other sessions including our annual Campus and Friends Showcase – an opportunity for our campuses and partner organizations to share their work and network with one another. More than 18 campuses and partner organizations hosted showcase tables this year. Attendees were also able to participate in roundtable discussions about a variety of topics on Saturday afternoon.

At the end of the day on Saturday, meeting attendees reconvened for a closing plenary featuring David Scobey, Executive Dean, The New School for Public Engagement (N.Y.). Scobey spoke about Post-Traditional Undergraduates and the Copernican Moment: New Models of Engaged Learning for the New Majority Student (listen here).

Afterwards, we celebrated the end of the conference with a closing reception at The Tavern, complete with dancing, a photo booth and a rooftop view of Denver.

It was an absolute honor to be surrounded by so many people who are passionate about and engaged in the struggle to protect and improve our democracy. ADP continues to be one of the most successful and dynamic civic engagement projects in the country thanks in large part to the tireless dedication of the dynamic individuals gathered in Denver.

We hope to see you in Louisville, Kentucky, June 5-7, 2014, for the next ADP/TDC National Meeting where we will continue our important work of preparing informed, engaged citizens for our democracy.

PowerPoints and other handouts from the meeting are available through the meeting’s mobile app for the next year.

Finally, to see more pictures from the meeting, visit the ADP Facebook Page. Please send any photos you took to adp@aascu.org so that we can upload them to Facebook!

Congratulations to all the presenters at the recent 2013 ADP/TDC National Meeting in Denver.  The eJournal of Public Affairs, a collaboration between Missouri State University and  ADP, invites presenters to submit their scholarship related to their conference presentations for publication. 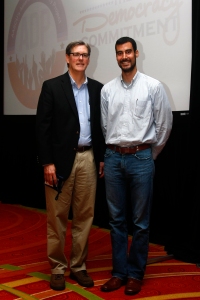 In an effort to recognize, support, and encourage the next generation of leaders in the civic engagement movement, the American Democracy Project established an award for emerging leaders in civic engagement in 2011, the John Saltmarsh Award for Emerging Leaders in Civic Engagement.  This annual award was named in John’s honor to recognize a lifetime passion of his: thinking about and preparing the next generation of civic leaders. To learn more about the Saltmarsh Award, visit this website.

The 2013 Saltmarsh Award recipient is Brandon Kliewer, Assistant Professor of Civic Engagement and ADP campus director at Florida Gulf Coast University. He is also a civic engagement fellow at the Points of Light Foundation, working to develop an online certificate program in community-engaged leadership. His scholarly attention is currently focused on a book-length project related to civic dialogue, community organizing and social change. He holds a Ph.D. from The University of Georgia in political science and a master’s degree in political science from Virginia Polytechnic Institute and State University.

John Saltmarsh presented Brandon with his award at the 2013 ADP/TDC national meeting in Denver on June 7.

CSU Fresno’s Provost William A. Covino has been awarded AASCU’s 2013 William M. Plater Award for Leadership in Civic Engagement. He was presented with the award at the American Democracy Project national meeting in Denver on June 7, 2013. 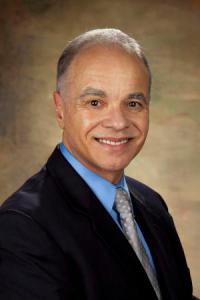 Each year we recognize an AASCU Chief Academic Officer (CAO) for his or her leadership in institutionalizing civic engagement on their campus. The William Plater Award for Leadership in Civic Engagement, established in 2006,  is designed to recognize the critical role of the chief academic officer in advancing the civic mission of the campus through curricular reform, public advocacy, accountability for institutional citizenship, faculty development and recruitment, and partnerships with community organizations. The Plater Award is the first national award established specifically to honor and recognize CAOs for their leadership in higher education and is funded through the generosity of AASCU member campus Indiana University Purdue University-Indianapolis.

“Among an impressive group of finalists for the William M. Plater Award, Provost William Covino stood out,” said George Mehaffy, AASCU’s vice president for academic leadership and change. “He has an amazing vision for the role of the university in preparing the next generation of informed, engaged citizens.

“I was impressed with how comprehensive civic engagement is at Fresno State. Bill’s leadership connected his campus to all corners of his community, improving the educational outcomes at Fresno State and enriching the community it serves,” Mehaffy said. 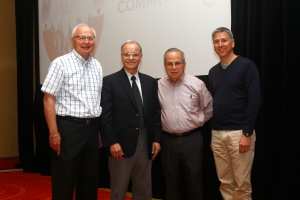 According to philanthropic standards, the estimated economic impact of Fresno State’s community service was greater than $28.5 million in the past year.

“This is a great recognition of the commitment of so many at Fresno State to creating a true and lasting university-community partnership, and to the ethic of engagement, service and citizenship that is so deeply held by our faculty, staff and students,” Covino said of the award.

We announced a student-designed logo competition back in January for a new ADP logo. We received more than 30 logo designs from more than a dozen ADP campuses. The designs were original and captured the creativity and imagination of dozens of student designers.

We were especially delighted to unveil the new ADP logo at last week’s the American Democracy Project national meeting in Denver, Colorado. The winning team of students came from the University of Missouri-St. Louis (UMSL) — itself celebrating its 50th anniversary this year. The student design team was enrolled in Kristy Tucciarone’s creative advertising course in which designing an ADP logo was incorporated as a class assignment. The team of four winning undergraduate students consisted of Sivya Smason, Candice Harper, Brianca Johnson, and Jacob Endejan.

Sivya Smason, a sophomore studying marketing, was on hand in Denver to receive recognition for her team’s winning design at the opening plenary. She was accompanied by Kristy Tucciarone and UMSL’s Patrica Zahn who introduced the course assignment, UMSL’s participation in ADP and Sivya herself. Tucciarone had this to say about incorporating the competition into her creative advertising course: “I teach logo design in my course, Creative Advertising. The logo competition for ADP was a perfect fit with my curriculum plus the students were exposed to an organization that promotes active and involved citizens in their community.”

Sivya noted that she and her teammates “tried to incorporate ideas that we felt represented ADP’s core values. The circular shape is meant to represent continuity–continuity of civic engagement and continuity of growth. The hands represent the students of ADP with whom involvement in ADP starts as well as the power of unity and of community.”

Instructions for campuses to download and modify the new ADP logo with their campus name will be sent to campus coordinators later on in the summer!