Campus Spotlight: Civility at the University of Northern Iowa

Gerri Perreault, ADP Campus Coordinator, Director of Leadership Studies and Associate Professor of Communication Studies at the University of Northern Iowa, shares a civility brochure developed by the UNI ADP group based on their Civil Discourse and Opposing Views series.

Most recently, the series brought former Congressman Jim Leach to campus to lecture on civility and politics in November 2014. He spoke about how and why civility has broken down so broadly in national politics today.

Perreault has also published an article on UNI’s civility series:

Abstract
Leaders often display the all-too-human characteristic of talking only or mostly to people with whom they agree. Yet, to be effective as a leader in many circumstances requires reaching out and engaging in dialogue with those who one may fundamentally disagree and may even view as an enemy. To do so requires a particular conception of leadership, one that values dialogue. Effective dialogue, however, requires both skill and will. This article describes the concepts and strategies of a university program developed to encourage the will to engage in dialogue.

Bring It To The Table tours U.S. Colleges and Universities with Live “Table Talks”

Do you know your roommate as well as you think you do? Do you know how your colleague feels about immigration, taxation, same-sex marriage? How does your professor feel about gun control? Or your partner about abortion? Do you talk about it?

In 2013, “Bring It to the Table,” the community engagement campaign and documentary film series, is visiting universities across the United States, encouraging students and faculty to have these conversations. We want to hear core beliefs and insights from students at the undergraduate, graduate and PhD level. We want to hear your solutions to move our country forward.  Why do you believe what you believe?

Since our last American Democracy Project blog post in June 2012, “Bring it to the Table” has visited select universities, bookstores and barbershops, public parks and county fairs, churches and bars, the Republican and Democratic National Conventions.

Produced by Julie Winokur and the non-profit, non-partisan Talking Eyes Media, Bring It to the Table literally invites people to sit down at a small star-spangled table and share the roots of their political beliefs.  The campaign is designed to give “ordinary” citizens a chance to speak their minds about their political beliefs, and hear the reasoning behind different points of view.

Our “Table Talks” have been featured by NBC News, Out Magazine, NPR and others who are buzzing about the way “Bring It” encourages genuine bi-partisan discourse. We have captured national attention because we have created a safe space where people can speak openly and authentically, without having to defend themselves against attack. There’s no ranting, no rhetoric. Just honest opinions and deep-seeded beliefs. The project provides a chance for people to engage across party lines, and most importantly, to actively listen to their fellow citizens.

The reality in America today is that people who have different points of view simply don’t talk to each other about politics. That’s a dangerous bellwether for democracy. In the wake of Congress’s December performance, we see how divisive politics and the refusal to collaborate can weaken the morale, economy and pride of a nation. No matter where you are on the political spectrum, the ability to communicate and negotiate is essential.

Bring it to the Table actively fosters the cross-pollination of voices and ideas. It is not intended to change anyone’s ideology or political affiliations, but rather to encourage respect, tolerance and genuine dialogue. Discovering shared values can lead not only to collaborative actions between individual Americans, but it might inspire our politicians to do the same.

Whether you are a law student, an aspiring engineer, a nursing student or a philosophy major, listening is the key to ethical business, civil discourse, strategic negotiation, healthy compromise and results-oriented solutions.

HERE’S HOW IT WORKS 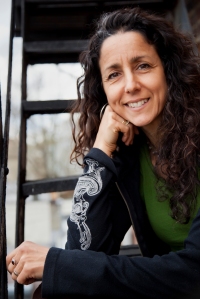 Julie Winokur has been creating film and multimedia for more than a decade. Her company produces and distributes books, films and exhibitions about national social issues. Julie’s work has appeared in The New York Times Magazine, The Wall Street Journal, National Geographic, Discovery, PBS, NPR, CNN, Global Post, VII The Magazine and other top news outlets globally. She and her team have been recognized with two Emmy Award nominations, and multiple awards from World Press International, Pictures of the Year, the Society of Professional Journalists, and the National Press Photographers Association. In January of 2013 she edited a feature for Global Post as part of their current eight week series “The Great Divide” about economic disparity worldwide.  The production and creative team include Jessey Dearing, Elissa Pellegrino, Andrew Hida, Julie Turkewitz, Kimberly Soenen, Sasha Jiwani, Ed Kashi, Lauren Glading, Mara Mellstrom and Becky Kumar.

Facebook has been aflutter with political commentary and heated debate over a variety of hot-button issues ever since the election ended but especially in recent weeks as a result of the Connecticut shootings and the fiscal cliff issues facing Congress.

While advocates of civil discourse are no doubt glad that people are coming to the table to talk, speech that is divisive and unproductive is not necessarily the desired outcome.

Perhaps this is why the American Democracy Project at California State University, Fullerton (CSUF) hosted a series of town hall meetings aimed at engaging students and teachers in discussion around the topics that are most likely to produce these kind of disputes. The goal of the gatherings is to bring the peace back to participation. To educate students how and get them to engage in dialogue that is informed and free of hostility. Discussions that move people from shouting to listening and the community from screaming to solutions.

The first series of these town halls was focused on social policy and drew over 250 attendees on the first day. A session on economics followed it a couple days later, and the most recent one focused on civil rights and liberties—including same-sex marriage, women’s rights, immigration, and legalization of marijuana.

NORMAL, Ill. – Illinois State’s American Democracy Project (ADP) has launched a new project that seeks to encourage students and others to critically assess and interact with important social issues. ILSTU Views in an innovative internet and social media tool that could revolutionize civil debate and political communication. The ILSTU Views system will employ digital media displays located around campus, at which students and members of the community will engage in civil discourse by responding to local, national, and global questions.

Each ILSTU Views kiosk will use a touch screen, computer, and USB camera, with the system linked through a central website to social media (e.g. Facebook). ILSTU Views is part of an integrated campaign at Illinois State to promote understanding of social issues, with discussion in a range of classes reflecting topics featured on the displays.

According to Stephen Hunt, Co-Chair of ISU’s ADP and Professor of Communication, “We envision ILSTU Views as an experiment in the use of digital media to encourage individuals to engage in constructive dialog on the most important issues of the day. If successful, our interactive kiosks will foster a sense of community, sharpen participants’ abilities to critically consume information, and promote responsibility for participants’ own voice.” The ILSTU Views team is also interested in how this project can help participants use digital media and their social networks to create change for the common good. The first ILSTU Views kiosk is installed in the lobby of Fell Hall on ISU’s campus!

The American Democracy Project is dedicated to educating students on responsible civic and political engagement. Illinois State was selected along with 10 other campuses nationwide as model political engagement institutions by the American Association of State Colleges and Universities (AASCU) in 2006 and received the national Program of Excellence Award for Political Engagement in 2011.

THE NATION TALKS HIGHER EDUCATION – THE LATEST FROM SHAPING OUR FUTURE

Thank you for your interest in Shaping Our Future, our project to spur thoughtful, inclusive, and open deliberation on the future of higher education on campuses and in communities nationwide. Here’s an update from the National Issues Forums and the American Commonwealth Project on what’s happening this fall.

We welcome your comments, and please let us know if you’d like more information about participating in the Shaping Our Future Project.

Join Us For A Moderator Preparation Webinar
FRIDAY, OCTOBER 26, 2012:  2PM

This coming year, more than 60 campuses and communities will host shaping our future forums. Here’s your chance to find out how to participate.

This free webinar is designed specifically for anyone interested in hosting or moderating deliberative forums for the National Shaping Our Future Project. This project is a joint effort of the National Issues Forums Institute and the American Commonwealth Project.

Participants can ask questions and/or give comments via chat (or voice, if your computer has a microphone).

The webinar will cover these topics and more:

Please click the link below to get registered today. Have specific questions? Send them to us ahead of time and we’ll include them in the webinar discussion period! (alee@kettering.org)

Specific web URL and user credentials to access the Webinar will be sent to you upon registration via the email address you provided during the registration process.  Register Now!