Check out these various media projects commemorating these two moments in our collective history:

Tell us how you and your campus commemorated these two historic occasions!

It’s the first of November, and although there isn’t a presidential race to be decided, Election Day will still be upon us after this weekend. And on this Friday, just in case you were a little down about not being able to bubble in a candidate for the Oval Office, the George W. Bush Presidential Library and Museum in Dallas will at least let you pretend to there. In the Oval Office, we mean. Or maybe the Situation Room.

In the Decision Points Theater in the museum, visitors get to have an interactive experience and, as the The New York Times wrote in an article it ran in April on the museum,  “will be presented with the stark choices that confronted the nation’s 43rd president: invade Iraq or leave Saddam Hussein in power? Deploy federal troops after Hurricane Katrina or rely on local forces? Bail out Wall Street or let the banks fail?”

NPR also covered this feature of the museum; you can read that piece here.

Make it a great weekend, and, if you’re in Dallas, you be the decider. And, a little early, but don’t forget to vote!

Earlier this week, before the government reopened for business, some states decided to do a pretty cool thing and open their national parks on their own dime.

It started with three major national landmarks–the Grand Canyon, Mount Rushmore, and the Statue of Liberty. (Want to know how much a date at one of these places costs? Hint: more than dinner and a movie. Find out here.) But they weren’t the only ones. To read more on which states followed suit and why (and where tourism is big for the economy), check out this article in The Atlantic.

Make it a great weekend, and be sure to enjoy a national park or museum–they’re worth it.

Happy #ADPFF from a very wet Washington, DC, all!

Today’s links (and videos) are more nerdery and inspiration than anything else, but both caught my eye.

When I was skimming my Feedly this morning, I came across Seth Godin’s blog and then checked out this video, which he linked to in a post. Besides shocking information about income distribution in America, it’s a pretty cool practical application of statistics (a class I’m now taking in graduate school).

And, I know it has been all over the web, but I just managed to watch the video after clicking on another of my Feedly links. My point: if you haven’t watched this girl leave Jon Stewart speechless, you should.

Make it a great weekend!

We’re coming to you from back in the District of Columbia today, but we just can’t seem to get over just how much #ADPTDC13 rocked our last week so…

I bring to you some of my personal favorite #ADPTDC13 tweets and pictures (full disclosure: there is a picture featuring me–that I didn’t take or post–and one of my own tweets that highlights how great our #ADPTDC students are). 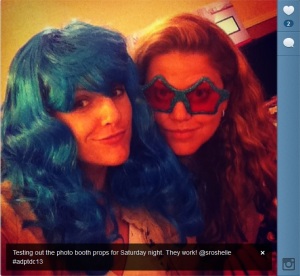 From @ShariBax: At what other academic conference do they provide tattoos? UCM is game. #adptdc13

From @Sassy_Audrey: ADP is building a student advisory council!! So excited to see a focus on student involvement! #adptdc13 @MoSantosPinacho @musicsuncoffee

From ‏@molijuice44: I’ve learned more about civic engagement in one day than I have in a year. #adptdc13

From @DocPolitics: Re civic engagement “I’ve been forced to get more out of my life” yes!!! Best way to wrap this year’s conference #adptdc13

And, we didn’t get the chance to tweet this one but…How awesome is this shot of Amee Bearne, The Democracy Commitment’s National Coordinator, as she gets a spare in Wii the People bowling?