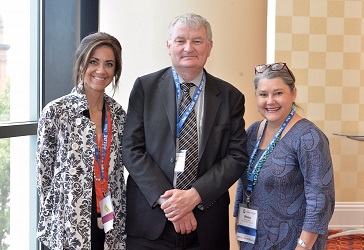 “This year’s civic engagement award recipients were selected from an incredibly rich, qualified pool of nominations and together represent a spectrum of leadership for civic learning and democratic engagement as well as engaged scholarship,” says Jennifer Domagal-Goldman, national manager of ADP. “Their work reflects the commitment of AASCU and ADP institutions—and their senior administrators and faculty—to ensuring that students graduate from our state colleges and universities equipped with the knowledge and skills needed for informed, engaged citizenship in our democracy.”

The Barbara Burch Award for Faculty Leadership in Civic Engagement was established in 2014 to honor exemplary faculty leadership in advancing the civic learning and engagement of undergraduate students and advancing the work of ADP. This year’s recipient, Shala A. Mills, is chair and professor of political science at Fort Hays State University (Kans). Mills has been extensively involved in AASCU programming, serving as the national manager of the national blended course consortium and as the national coordinator for the global challenges project.

“While many in academia give lip service to civic learning through an interdisciplinary approach, in my experience it is far more difficult to meaningfully commit one’s career to that work in all three areas of teaching, research and service” says Tina Zappile, political science faculty member at Stockton University (N.J.). “As demonstrated in her impressive record in all three areas, Shala has put civic learning and engagement at the core of her work and clearly demonstrates a deep commitment to increasing opportunities for students to address complex public problems from multiple perspectives in the process of being more active in their communities.”

Philip Rous, this year’s recipient of the William M. Plater Award for Leadership in Civic Engagement, is provost and senior vice chancellor for academic affairs at the University of Maryland, Baltimore County (UMBC).  Shortly after becoming provost, one of Dr. Rous’s first acts was committing funding for a new campus initiative in response to calls for higher education to integrate commitments to civic learning and democratic engagement into every aspect of institutional life.

“Philip is an authentic leader who believes deeply in the service role of universities, and he sets a tone that encourages all of us to serve others and be engaged in the community. He does not just speak the language of civic learning and democratic engagement, he makes a true commitment to the work,” says Freeman A. Hrabowski, UMBC president.

The award is named after William M. Plater, Indiana University Purdue University Indianapolis’ (IUPUI) chief academic officer from 1987 through 2006. During his term at IUPUI, Plater oversaw the development of civic engagement as an integral part of the campus mission and as a defining characteristic of its graduates.

The John Saltmarsh Award for Emerging Leaders in Civic Engagement was awarded this year to Danielle Lake. Lake is an assistant professor of liberal studies and inclusion and an equity faculty associate at Grand Valley State University (Mich). She has demonstrated a commitment to advancing the civic learning of undergraduates by helping develop the university’s first CBL/Design Thinking course on campus.

“Danielle exhibits a drive and passion for developing the principles of community engagement in faculty, staff and students. Her collaborative efforts regularly exceed the expectations of her peers,” says Dr. Lisa Sisson, assistant professor of hospitality and tourism at Grand Valley State University.

The award was created in honor of John Saltmarsh, co-director of the New England Resource Center for Higher Education at the University of Massachusetts Boston, as a tribute to his dedication to nurturing the next generation of civic leaders.

The 2017 Civic Learning and Democratic Engagement conference is a partnership between ADP, community college members of The Democracy Commitment, and NASPA—Student Affairs Professionals in Higher Education. The conference is intended to strengthen and deepen the civic learning and engagement work that these associations are all committed to across their institutions—both public and private.  Over 600 participants are attending this year’s conference.

###
The American Association of State Colleges and Universities (AASCU) is a Washington, D.C.-based higher education association of more than 400 public colleges, universities, and systems whose members share a learning- and teaching-centered culture, a historic commitment to underserved student populations, and a dedication to research and creativity that advances their regions’ economic progress and cultural development. These are institutions Delivering America’s Promise of Opportunities for All.