by American Democracy Project on May 7, 2016

This June, at the 2016 Civic Learning and Democratic Engagement (CLDE) Meeting (#CLDE16), the historic landmark of Democracy Plaza at Indiana University-Purdue University Indianapolis (IUPUI) will be showcased as one way to make place(s) across our higher education institutions intentional and meaningful for their campus’ (i.e., students, faculty, staff) political engagement.  If your institution also has a place designated for discussion about or engagement with political ideas and issues, please tell us more about it by filling out our survey here, before it closes on Friday, May 13th at 11:59 p.m. EST. 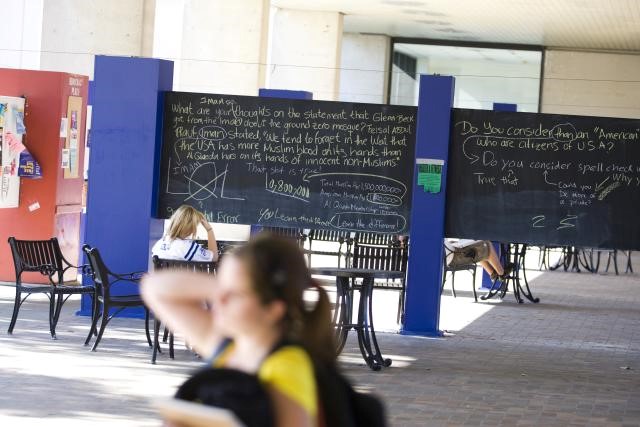 After the “hanging chad” incident during the 2000 presidential election, students at IUPUI vocalized that there must be a place on our campus where our community’s constituents can come together (formally and informally) to discuss the most pressing political issues of our time.  What manifested from these students’ passion and voices is the public landmark of Democracy Plaza (DP): 22 large chalkboards in the middle of IUPUI’s urban campus.

Every week, each of the 22 chalkboards has one question written on it regarding political ideas or issues which solicit passers-by to write a response, to either the question or other responses; these questions are generated by IUPUI students who receive a scholarship for their work. Then in 2012, the concept of Democracy Plaza was extended to three white boards in the IUPUI Campus Center. In between, these more formally designated places, “pop-up” Democracy Plaza boards have been found around gathering places within the edifices of IUPUI. 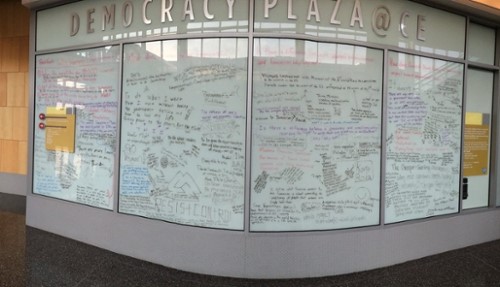 What the places of Democracy Plaza does cannot be quantified, however, what is clear is that it does send clear literal and rhetorical messages to IUPUI constituents. These places can be seen, they can be enacted with (touched, erased, molded), and they can host events as well (i.e., programming around political ideas and issues). These places and spaces send a clear message that having the time and place to engage with political ideas and issues and those that are different from you (through public, written communication) is important. As many of us know, place and space on any campus is its own political issue, and therefore, to see (literally) that IUPUI has given a part of its place to the co-construction of the public sphere is promising.

And you can do it too! There will be two opportunities to learn more about not only IUPUI’s Democracy Plaza, but how others have carved out intentional and meaningful places at/on/across their institution for political engagement. Here they are:

Please plan to join us in June by registering here.