Note: Lauren Bird was a plenary speaker at last week’s 2014 ADP/TDC National Meeting in Louisville, Ky. You can learn more about her organization, The Harry Potter Alliance, and their work to advance social justice and community engagement online and in communities around the country and across the globe  in the blog post below. 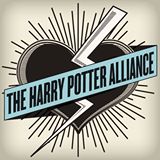 The Harry Potter Alliance is a nonprofit that turns fans into heroes. We channel the enthusiasm of fans toward positive causes by using parallels from popular stories to make activism and social justice accessible. By using the power of story and digital media, we’re able to meet young people where they’re at and provide an easier barrier of entry than traditional activism.

Over the course of eight years, our members have done some incredible things:

We have 250 chapters in 23 nations across five continents (that Antarctica demographic is a tough one to crack), plus an online audience in the hundreds of thousands.

We’re fortunate to have been founded by and have a membership largely made up of nerds and artists, both of who tend to be at the forefront of new media. We approach online activism both as a means to an end, but also as an end itself. While we attend many in-person events where we meet and recruit new members, we are an online organization. We don’t have a headquarters or a main office. Most of our members discover us online. For a lot of them, this online discovery translates to on-the-ground action, but there are many who can’t or aren’t interested in taking IRL (in real life) action for one reason or another—and we don’t write them off. In fact, the bulk of our actions for individuals are online actions. Whether it’s spreading the word, sending an email to a legislator or creating art about the issue, our members participate in a thriving online activist space that doesn’t belittle their contributions simply because they take place online.

To give just one example, right now we’re using The Hunger Games to work on economic inequality, and we aren’t doing it alone. Several organizations fighting for workers’ rights have adopted some of the imagery and messaging from our Odds In Our Favor campaign, using it at rallies and marches around the U.S. But the three-finger salute from the books as a symbol for economic equality and our branding of unjust legislation as “Hunger Games Policy” would not have been adopted by those organizations if it hadn’t been for our core membership popularizing that messaging on social media last fall when the second film, Catching Fire, was released in cinemas

By using fans’ genuine interest in stories and mobilizing them centrally online, we’re able to enact real-world social change. Join us and learn more at thehpalliance.org.