by American Democracy Project on November 6, 2012 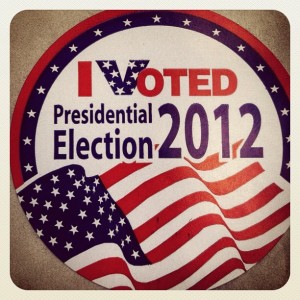 Tuesday, November 6, 2012. Election Day. Known to many as the most demonstrative display of our country’s democracy. Known to others as the culminating experience of the wearisome political advertisements…at least for a few years. And known to American Democracy Project campuses across the country as an opportunity to politically inform and engage our citizen students.

The following ADP colleges and universities responded to a recent survey or informed us about their Election 2012 efforts, and we encourage you to keep reading to find out more about the goals and specifics of their programming.

Regarding goals and/or learning outcomes for Election 2012 programming, ADP campuses identified the following:

Below are some highlights from a few of our campus across the United States:

Lander University
Lander University used Constitution Day as a jumping off point for their Election 2012 activities. One of their activities included student audio Get-Out-the-Vote (GOTV) promos. Download and listen to one here.

Salisbury University
Salisbury University focused on voter registration and held registration tables every Wednesday, as well as a Volunteer Voter Registration seminar in order to get its student population registered to vote.  This ADP campus also held a Presidential Debate Watch Party on October 16, 2012, for students to watch the debate in a compelling and educational setting.

Towson University
This ADP campus utilized a customized TurboVote site to allow anyone with a Towson domain in their email to register to vote quickly and receive email and text reminders about their respective polling place, deadlines, rules, absentee ballot forms, etc. Towson also hosted a myriad of events that provide students with opportunities to discover what party they most identify with and to help them find nonpartisan information on candidates. http://www.towson.edu/studentaffairs/civicengagement/politicalEngagement/index.asp

University of Central Oklahoma
For the third year in a row, the University of Central Oklahoma won the Oklahoma Campus Compact voter registration contest. In addition, this year the campus hosted a special naturalization ceremony welcoming the chief judge and three other judges from the U.S. District Court, Western District of Oklahoma, and 125 new citizens to our campus. The university also plans to release the Oklahoma Civic Health Index on November 16, 2012. http://www.okhighered.org/okcampuscompact/

University of Minnesota Duluth
Like many of our other ADP campuses, the University of Minnesota Duluth wanted to register more of its students to vote. This university also utilized resources from the Minnesota Secretary of State’s Office, the League of Women Voters, the candidates themselves, and local non-profit advocacy groups to help inform and educate their students. http://www.d.umn.edu/student-life/consumer-information/voter-registration/

University of Wisconsin Oshkosh
This ADP campus’ website gives the basics on how to navigate through the voter registration process. http://www.uwosh.edu/adp/elections

University of Central Missouri
In September, this university focused on voter registration. This ADP campus kicked off Election Season with a Rock-the-Vote event featuring music, games, prizes, food, and campus and community leaders who gave 1-minute GOTV talks. Throughout the month, the campus planned to conduct over 175 in-class peer-to-peer voter registration programs, in addition to residence hall and student organization programs and tabling events.  In October, the University of Central Missouri focused on voter awareness and mobilization. It hosted debate watches with pre- and post-debate panel discussions, candidate forums for state legislative and U.S. House races, and a voter information fair featuring local candidates. It also held its own debate and featured the debate team discussing the ballot issues. This campus also planned to host an Election Night watch party with the possibility of Skyping in some national level speakers for commentary.

Weber State had specific goals regarding student participation in the election. This ADP campus wanted to register 3000 people to vote and, the only campus reporting to us having focused on this, recruit 60 students to work as poll workers in the local counties.

To read more about what our ADP campuses have been up to this fall, be sure to check the blog later this week for an ADP in the News post. Also, if you haven’t already, take a look at how our ADP debate tweet-ups went here.