by American Democracy Project on October 19, 2012 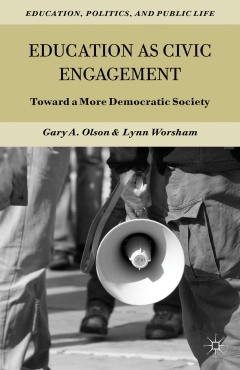 EDUCATION AS CIVIC ENGAGEMENT: Toward a More Democratic Society

Edited by Gary A. Olson and Lynn Worsham

Education as Civic Engagement: Toward a More Democratic Society is a collection of ten essays examining education—mostly higher education—as civic engagement. These essays are the finest works of scholarship on education published over the last decade in JAC, an award-winning journal of rhetoric, politics, and culture. Collectively, the works in this volume analyze in a substantive and rigorous manner a number of key issues in the politics of education.

Gary A. Olson is a noted scholar of rhetoric and culture and a keen observer of higher education in America. He has served as a both a university provost and a dean. Olson writes a popular monthly column on academic administration for the Chronicle of Higher Education and currently is a professor of English at Idaho State University.

Lynn Worsham is a professor of English at Idaho State University and editor of JAC, an interdisciplinary scholarly journal of rhetoric, politics, and culture. She has published seven books, including The Politics of Possibility: Encountering the Radical Imagination and Race, Rhetoric, and the Postcolonial (both with Gary Olson). She is currently working on a book on psychopathology in America.

Here’s what ADP’s own John Presley has to say about the book:

“Education as Civic Engagement should be read by anyone teaching the democratic skills of critical inquiry, collaborative work, and communication, and most certainly by those who prepare teachers for public education where these skills begin to appear in the curriculum. The ideas in this volume must be discussed in classes that touch on the structure, governance, fi nance, and history of American public higher education. We cannot go on without understanding the real situations we face.”
—John W. Presley, Illinois State University

PART III: TOWARD A PEDAGOGY OF HOPE