by American Democracy Project on September 4, 2012

As you drive through the Roosevelt Archway entering Yellowstone National Park you notice an engraving that reads “For the benefit and enjoyment of the people.” 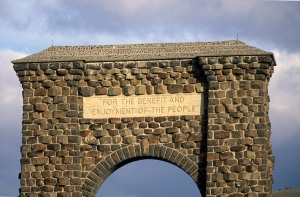 The Roosevelt Arch is located in Montana at the North Entrance of Yellowstone National Park. The arch’s cornerstone was laid by Theodore Roosevelt. The placard reads “For the Benefit and Enjoyment of the People.”

While just over 3 million visitors both benefit from and enjoy the park each summer, a unique set of environmental policy problems arises in trying to manage this public good. From the reintroduction of wolves to debates about the winter use of snowmobiles, citizens hold divergent opinions about polices related to the park and its surrounding communities.

One of the current controversies involves control of a disease, brucellosis, in Yellowstone bison.  For over four decades the management of this idyllic symbol of the American West has been labeled as a “wicked” policy problem.  The brucellosis controversy stems from a biological disease, but manifests itself as a political conundrum for the state of Montana.  As the bison migrate out of the park they come into contact with herds of cattle; the livelihood of private ranchers is dependent upon keeping their cattle brucellosis free.  Over the course of the last decade, thousands of wild bison have been sent to slaughter in an attempt to protect the ranching industry.

In August 2012, 17 faculty members from a variety of disciplines and campuses gathered in Yellowstone for the eight

annual Stewardship of Public Lands seminar, a Civic Engagement in Action Series initiative of the American Democracy Project.  We were led by the AASCU leadership comprised of George Mehaffy and John Hammang and a Yellowstone Association team comprised of Brad Bulin and Danielle Chalfant.  Together, we spent six days exploring controversial issues in and around Yellowstone.

This was my second time as a seminar participant.  After returning from my first SPL seminar in Yellowstone during the summer of 2009, I credited the seminar with being one of the single greatest learning experiences of my career.  I believed the same during this second iteration.  Over the past three years I have become very passionate about many of the issues covered in the seminar and I have been lucky enough to be able to take students to Yellowstone to have the same experience.  One of my student’s wrote the following upon his return:

Throughout my college career, I have always been extremely interested in public policy. However, I never considered myself an outdoorsman. Despite this fact, I still consider going to Yellowstone and studying public policy there one of my most positive experiences in my academic career. It was extremely beneficial to have the firsthand experience and chat with the Yellowstone locals about issues that impact them on a daily basis, such as brucellosis, the wolf population, the consequences of having non-native fish in Yellowstone, and efforts to reduce pollution in the area. Not to mention it is an added bonus to have the remarkable scenes around you every day at Yellowstone Park. Studying these challenging issues really opened my eyes to other public policy issues that I may not face in the Midwest region.

I encourage you to consider participating in next year’s Stewardship of Public Lands seminar (July 29 – August 3, 2013)!