Writers’ Blocks: An Experiment in Design and Public Deliberation

by American Democracy Project on January 6, 2011

The Swiss psychiatrist Carl Jung believed that there is a collective unconscious that links all people in the world together. He conjectured that this is why we often witness the creation of similar myths and fables despite great distances in land, language, and culture. While no one can prove the existence of such a collective unconscious, certain events can at times make us wonder if there is something that connects and inspires us all. Case in point: Writers’ Blocks at Penn State University. Writers’ Blocks is very similar to the Democracy Plaza pioneered at Indiana University Purdue University Indianapolis (IUPUI).

“The Writers’ Blocks are a series of installation works which foster debate and engagement within public spaces…The project has been developed into a system for everyone to use, easily constructed from commonly available materials.” The blocks consist of artfully displayed chalk boards that showcase student-selected questions with Constitutional dimensions and were originally designed in celebration of Constitution Day in 2007. The blocks are located in a central location on the Penn State campus and feature questions such as “Should the Ten Commandments be posted in public spaces?” “Is torture justifiable?” and “Is intolerance of the 9/11 mosque fundamentally un-American?” (Taken from the Writers’ Blocks brochure.) Because of the installation of Writers’ Blocks, the Penn State community has engaged in an ongoing and sustained discussion about these and other important societal issues. In addition to this discussion, students have learned more about how the Constitution relates to their daily lives.

Aside from the civic learning that is taking place, what is remarkable about Writers’ Blocks is that it was created by Peter Aeschbacher and his architecture students with no knowledge of the Democracy Plaza project at IUPUI.  Writers’ Blocks grew out of a desire by Peter and his students to create discussion on campus about Constitutional issues. In 2008, the model was recognized by the American Institute of Architects and the Association of Collegiate Schools of Architecture with the National Education Honor Award.

“The project functions at two levels: as an example of design thinking applied to a topic outside the traditional bounds of design (the Constitution) and as an example of a problem-solving tool developed by a substantive engagement with an issue (public participation and civic engagement),” wrote Peter in a recent email to me. Peter continues, “my pedagogic strategy in taking on the topic of Constitution Day with first-year architecture students was to challenge them to come to terms with how they define their chosen profession and its public mission. In addition, the students were also asked to follow through with their ideas in a very disciplinary manner: actually designing and building the final projects. This process closely follows a design process of divergence>transformation>convergence at both the active learning as well at the project level.”

Peter and his students have refined the project so that it is easily replicable by campuses interested in using it for Constitution Day celebrations and other on-campus programming. With this goal in mind, Peter is in the process of developing a manual for installing Writers’ Block on other campuses. As soon as this manual is produced, I will share it on the ADP Blog. I encourage leaders in the ADP network to consider creating similar projects on their campuses – be it a Democracy Plaza or Writers’ Blocks or something else that suits the campus environment and circumstances and encourages discussion.

We see this project as a Signature Practice in Civic Engagement. The project necessitates multidisciplinary learning by, for example, challenging architecture students to explore how landscape architecture might create space for political discussions and learning. Writers’ Blocks also supports an ongoing conversation about how Constitutional issues impact our daily lives, thus developing in students a deepened understanding of the Constitution. Finally, Writers’ Blocks allows students to hone the important civic skill of discussing difficult political issues in a civil manner.

Whether or not the spontaneous creation of two identical and innovative projects proves the existence of a collective unconscious is somewhat unimportant for our purposes. What is important is that both projects arose on separate campus communities to create space for a visual and verbal grappling with pressing contemporary issues facing our democracy.

Question: How might your campus create civic spaces similar to Writers’ Blocks that support ongoing discussion about Constitutional issues? 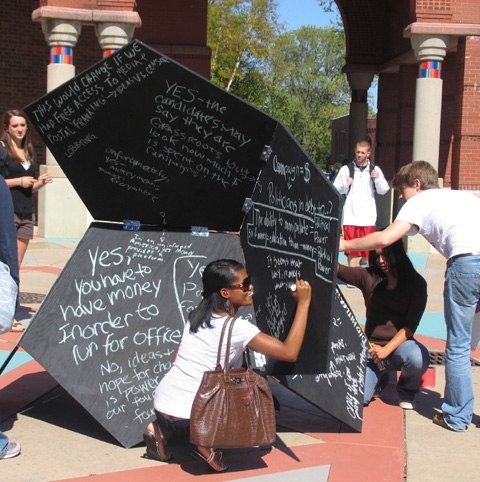